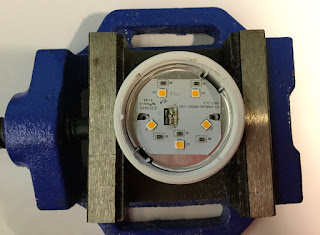 Teardown of the GU10. This lamp is good for two reason, price(around 7€) and no potting compound. The plastic lens is just to pop out from the case. Two hooks holding it place. No potting inside. To remove the Led board two tabs must be desoldered. Ikea have also added a strip of copper, probably to solve some EMC problem. Also it easier to pop out the pcb with a machine vice and press on sides.
1 comment
Read more 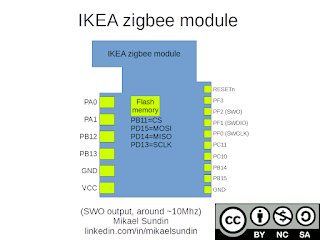 I have mapped the pinout for the Zigbee module used in the bulbs,5-button remote and, PIR sensor: I think the CPU is EFR32MG1P132F256GM32, this is a Cortex-M4 with 2.4Ghz ISM band TX/RX.
1 comment
Read more

April 30, 2017
To be able to run Trådfri gateway with Node-red and talk MQTT instead of CoAP i have found this application  TRADFRI2MQTT by hardillb Node-red will give more freedom to handle data in different format. For example connect Ikea trådfri with domoticz or more advanced control rules. One limitation of Ikea trådfri gateway is that you only get lamp/room information based on the lamp, no information is sent from a PIR sensor or a dimmer is used. I wish also that some python library also will appear, but the CoAP implementation i have seen lacks DTLS support on python. DTLS is used to secure the communication with Ikea trådfri gateway.
Post a Comment
Read more 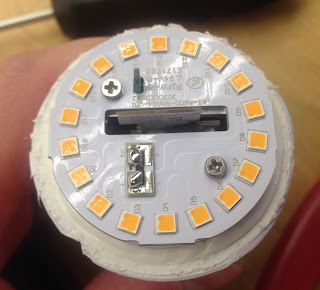 Teardown of a Ikea Trådfri bulb. Steps performed to take out the electronics: To remove the sphere i cut the plastic just where the base starts. Next step is to remove the LED ring on the aluminium PCB, just desolder the two tabs and remove screws. Next step is a little bit harder, here i used a vice and deformed the base to get the "heat spreader" off The E27 cap was removed by cutting the cap and use a plier. The electronics with the potting compound can be removed from base by using a vice again to deform base. Remove the potting compound is relative easy, it have a structure of dried clay and a removable type. Now the PCB is clean   The lamp seems fine from a electronic and heat perspective. All electrolytic capacitor is marked 130°C and the casting compound is probably to spread heat to base aluminium case and electronic isolation. The led ring is two serie connected strips of 9 leds each. The Aluminium PCB also has heating compound between the PCB
3 comments
Read more

April 30, 2017
This blog will contain various Ikea trådfri information i found by check the hardware and the internet.
Post a Comment
Read more